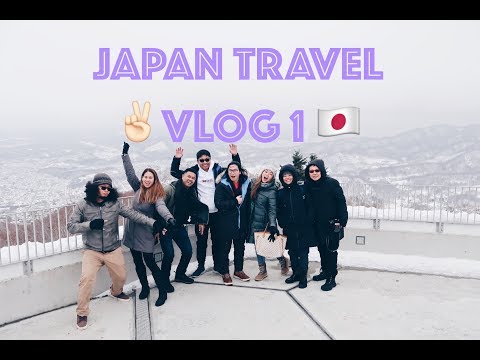 February 3:
1000am-Departure from San Francisco, CA to Haneda, Japan via United Airlines (ANA codeshare).
0230pm-Arrived at Haneda Int'l Airport and transferred to the domestic terminal.
0600pm-Departure from Haneda Domestic Terminal to New Chitose Airport in Sapporo via ANA Airlines.
0730pm- Arrived at New Chitose Airport. Our private transfer was already waiting for us when we got out of the airport.We booked it through Sky Station (
0900pm-We finally arrived at our hotel in Sapporo.

4:40 February 4:
We took a day tour around Sapporo via Chuo Bus.The itinerary was awesome as we got to see a lot of places.I just wish it was multilingual because we didn't know the tour was only going to be in Japanese ... But we still enjoyed it regardless.

13:24 February 5:
Took the subway to Sapporo Station to have the best conveyor belt sushi in Hokkaido.There weren't a lot of people yet since we got there an hour before they opened.We immediately got a ticket (had to use google translate because the kiosk wasn 't in english) and just went around first while waiting.We saw Kinotoya Bake at the JR Sapporo East Entrance.Hokkaido is known for its seafood and dairy so we made sure to try both.This is probably the best sushi, and cheese tart I've had as of yet.So be sure to go there when you're in Sapporo!
17:49 After lunch, made our way to Odori Park for the Sapporo Snow Festival.We went up the Sapporo TV Tower, and then strolled around the park to see the snow sculptures.Everything was amazing! We didn't mind the cold because There were a lot of food, and drink stands.It was crowded but it wasn't loud.People were just admiring the snow.Another thing was there weren't trash around.Something I've never experienced when in a festival.It just goes to show how respectful and disciplined the japanese people are.So be sure to act accordingly when you visit Japan.

20:11 February 6:
We headed to Tsudome Site, which was also part of the Sapporo Snow Festival. They offered shuttle service from Sakaemachi Station for a 100yen (less than a dollar) .You have to pay for most of the attractions, like the snow tubing, and snow rafting, but it was less than 1000yen (around 6 dollars).
21:53 Went back to Susukino after Tsudome for the Susukino Ice Festival.But first, karaoke at Big Echo! Because everyone sings when Bohemian Rhapsody is on.lol

22:58 February 7:
Took the subway again, this time we went to Otaru.
Had lunch at Naruto Honten (They have the best fried chicken I've ever had.The skin is crispy, and the meat is juicy and full of umami! We then walked to the famous canal. a few days, since we were going to be in Niseko by that time, but it was still worth a visit.We bought the double fromage cheesecake from LeTao, and headed to the Otaru Music Box Museum.We'll definitely spend more time here when we come back.

24:31 February 8:
Checked-out from our hotel in Sapporo, en-route to Niseko.We also booked our private transfer through Sky Station.
We arrived at Moiwa Lodge (around noon, but we didn't get to check in until 3pm. Our room was big! It has four bunk beds, two queen beds, and we had our own bathroom! The basement is for snow gears. The second level has a bar, and a nice chill lounge.The dining area is at the third level.We got lift ticket discounts for Moiwa Resort as a perk for staying at Moiwa Lodge.We rented our gear at Winter First (through Moiwa Lodge also. The lodge was close to restaurants, and onsens.

26:06 February 9-11:
Finally got to experience the powder snow that Niseko has to offer! We went snowboarding in Moiwa Resort, Grand Hirafu, and Hanazono.We still have yet to try the slopes in Hilton, and Annupuri!

27:30 February 11:
Walked 20 minutes from Moiwa Lodge to Raku-ichi Soba 🍜 (for lunch.It's hard to get dinner reservations here as they get completely booked, months in advance, so we thought we'd try to walk in for lunch.We got there an hour before they opened, and we were the first in line.People started coming few minutes after we did.One guy said that they can only seat 12 people at a time, and the noodles are made by batches of 8 (meaning you have to wait for the first 8 people to eat before he makes another batch) .There was also a sign at the door that said they only serve 20 bowls a day, so we were really lucky to be the first ones in line!

28:52 February 12:
Left Niseko at 6am via Sky Station Private Transfer again, and headed to New Chitose Airport for our ANA flight back to Tokyo.

We truly had an amazing time in Hokkaido and I can't wait to go back! This is probably going to be a yearly thing now! Hihi! I love Japan!

Overseas reaction Chinese surprise! "Japan is terrible! In just a few days, this much .." I was impressed with the daily life of Japan that dramatically changed my daughter during my trip to Japan! [Foreign impressive episode]

Please register here. → Overseas reaction Chinese surprise! "Japan is terrible! In just a few days, this much .." I was impressed with the daily life of Japan that dramatically changed my daughter during my trip to Japan! [Foreign impressive episode] Chinese media and overseas network With quotes from Hong Kong and Japan, The number of Chinese tourists visiting Japan will increase dramatically At the same time, the main purpose of travel has changed It was reported to be seen. Conventionally, home appliances and brand products Shopping was a big goal, Recently I have been enjoying Japanese culture More Chinese ...