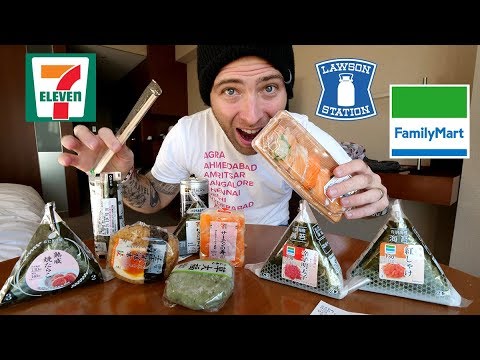 I've been a huge fan of Japanese food ever since I was a kid, but as an adult, for some reason I never prioritized visiting the country until January of 2019, when a job with a Japanese company hired me to film a video of the Asian island nation for five days.I extended my trip by an entire week so I'd get the chance to explore on my own time , and it's one of the best travel decisions I've ever made.I am in love with Japan, and in this video series you'll see why.

When I learned that convenience stores like 7-Eleven, FamilyMart, and Lawson are extremely popular places to grab some breakfast in Japan, I knew I had to see what all the fuss was about, so on the morning of my second full day in Tokyo , I went around the Shinjuku area of ​​the city to find the best convenience store food! Come along with me on my convenience store breakfast food tour of Shinjuku, Tokyo!

I left my hotel, the Hyatt Regency Tokyo, and set out on my adventure around Shinjuku.The Shinjuku area is like Tokyo's Times Square, as well as its financial district.It's beautiful, but this morning was really cold. Luckily it wasn't too far from my first stop, FamilyMart!

I targeted the onigiri section and grabbed the spicy pollack roe and salmon varieties, as well as some sushi, which cost me 678 Yen, or roughly $ 6 U.S. Pretty good deal! Next up, Lawson!

One thing you should know about Japan is that people here do n’t like to be filmed without their permission, so if you decide to go to Japan to vlog, be mindful of respecting the people around you.

On my way to Lawson, I grabbed a cold coffee from a vending machine for 100 Yen, or just $ 1 U.S. Vending machines are everywhere in Japan.There are over 2.4 million in the country!

I found a Lawson in the basement of the Shinjuku Center Building, where I bought a grilled pollack onigiri, a hand roll, and a green tea mochi for 460 Yen, or roughly $ 4.16.

It was a lot warmer when I stepped back outside and headed to my final stop, the local 7-Eleven, which happened to be right under my hotel! There, I bought a wasabi & seaweed onigiri, some salmon with rice, and a rice -covered soft-boiled egg for just 440 Yen, or $ 3.98 US Then I headed back up through the Hyatt Regency Tokyo, a luxury, five-star hotel with 700 rooms and 6 restaurants, up to my room, where I set up my convenience store treats!

I started with the coffee, which was dark and tart, and then dove into my 7-Eleven findings.I went with the wasabi and seaweed onigiri, which was sticky with a nice crunch from the seaweed.Fantastic!

Next was the soft-boiled egg with sticky rice.The rice had a different flavor, was just okay.The salmon with sticky rice was sticky with some super fresh salmon! There ’s so much rice, but it was ridiculously tasty.

Next, I went with the hand roll from Lawson, which had minced tuna inside.This is one of my favorite things to get in Japan!

I followed that with the grilled pollack roe onigiri.I love onigiri so much, and this one was unreal.The creamy roe provided a nice contrast to the sticky rice.

I went with my sushi next, which came with five pieces of salmon sushi, some pickled ginger, and some soy sauce and wasabi, which I mixed together.The sushi was extremely fresh and flavorful and it was even better with the pickled ginger. my favorite sushi of all time! It blew my mind!

The spicy pollack roe onigiri was next.It was very similar to the grilled pollack roe, and contained a lot of fish eggs.It was outstanding!

I finished with the green tea mochi, which is a gummy Japanese dessert made of a glutinous rice paste.They usually have something in the middle and are popular treats during the Japanese New Year.Mine contained a plum jam that was so fire!

I hope you liked this video of me buying and trying foods from Japanese convenience stores! If you did, please give this video a thumbs up and leave me a comment below.And please subscribe to my channel!

Book a stay at the Hyatt Regency Tokyo:

BOOK YOUR NEXT ADVENTURE: ►

Originally we were going to film another Beanboozle video, but our lovely boss decided to instead head to the local Japanese Market and buy some delicious snacks for us to eat! Check out the video and watch us try to land some tricks in a hope to not have to eat the mystery food! Follow the guys: Walter: Austin: Scotty: James: Follow The Vault Pro Scooters on Social Media: Instagram: Facebook: Twitter: Snapchat: "vaultproscoot" Visit our Website at: Subscribe for More! Check out some more of our content! Custom Completes: Reviews: Tutorials: Ride Days: Contact Information Local: 310-915-9330 Toll Free: ...