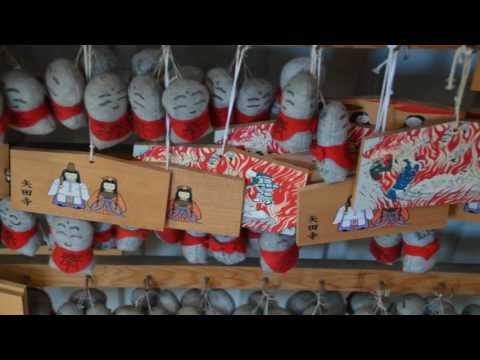 Ema (Ema) are wooden wishing plaques.On one site of the wood there is an art work.On the other side you can write a wish.

The word Ema consists of two kanji (Chinese Characters). The first kanji is picture (Picture). And the second kanji is horse (Horse).

First it was a Shinto custom (Nara Period) .The Ema consisted of pictures of horses.

Later when Buddhism arrived in Japan they also were found in temples.

At the Muromachi period other pictures were added at the Ema ’s like foxes at Inari Shrines.

At the temple (Buddhist) or shrine (Shinto) you will pay a small amount of money for the Ema.

Often you will find different pictures in one shrine or temple.

There are no rules to fill out an Ema.You can fill in the wish on the picture and your name and address on the other side. Often you will see foreign languages ​​on it.

The form of the Ema can be a round, square or other form.

Sometimes are hung up together with Omikuji. Omikuji are fortune-telling paper strips.

Picture books that transmit Japanese culture to the world are gaining popularity, as the number of foreign tourists has increased the attention of Japan. We interviewed the thoughts of those who were involved in the book making that attracted many people. Views:1454506438 High evaluation: 179 Low rating: 7 Post date:2016-02-03 13:33:58 VideoID:_RWQYKKAsu0 出典：YouTube

[Okinawa's voice] Is it a fake stamp ?! New suspicion of Denny's government! / The contractor in the whirlpool rips off with “refuse of reference” rejection! [桜R1/12/10]

PREV
Japanese Food Tour with Frank Pinello and Sakura Yagi | Sean in the Wild
NEXT
Top 7 Things to Do in Hiroshima-Hiroshima, Japan Travel Guide