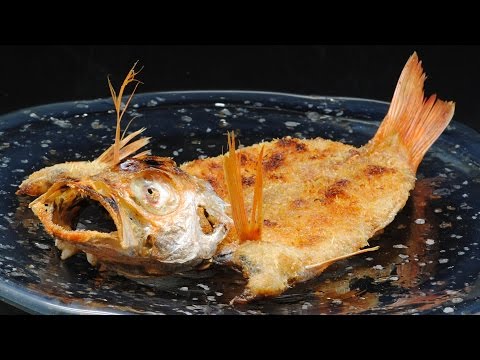 In January 2012, at the world cuisine summit "Madrid Fusion 2012" held in Madrid, Spain, the contents announced by Chef Yamamoto while explaining on stage will be released without editing.
Analyzing the traditional Japanese dish “Fried fish broiled” and aging while drying, the changes in protein, amino acid formation, and the mechanism that increases the taste from the raw state, Explained with history. And the stage of the new “dried fish” process presented by Ryugin, who has evolved as a gastronomy, as well as all the seafood near Japan, richness of materials, high quality, and high technical level While communicating from above, he showed the appearance of a Japanese chef facing the potential of just one fish.
When talking or communicating Japanese food overseas, first of all, it is important to convey the spirit of Japanese people, but it is more difficult to convey spirituality than to convey food.・. If Japanese senses, values, and spirituality are conveyed in a common language of the world and become able to speak, Japanese cuisine, like French cuisine and Chinese cuisine, will naturally become a global common language in the cooking world. We believe that all people will be able to talk about deliciousness based on the same standard, and we regard it as one of the future activity themes.

The red mutsu selected here is rich in both fat and moisture in the body, and has the potential to express deliciousness without leaving bones and scales. It is a wonderful and wonderful fish. Chef Yamamoto met in Hong Kong and was shocked that the texture of a restaurant's brittle chicken was ideal, but when considering that this texture could be applied to fish, red mutsu is the most ideal I started trial and error based on the idea that it would be shaped.
Measures, skin, muscles, fins, bones… and all the “reasons” of dry aging, but not only the process, but two things to convey. The first is to raise the possibility of dried fish to a gastronomy level that has not been expressed as a gastronomy, while having a wonderful taste.
And the second is that the technique is hidden in the fish itself, not just what is expressed on the plate. I wanted to convey the idea that the technique of not showing or not realizing is also one of the expressions.
】 The true meaning is that this fish makes the guest feel from the top of the plate as if it had fulfilled all of the ideal taste conditions when it was opened and grilled. Making a dish as if such a fish exists, with a state of crackling skin and all the bones that can be eaten crisply, with a perfect texture in the natural environment. The process is as shown in the video, but until the first one was created, it was a series of trial and error, including how to judge.
The Japanese spirit that treats and treats every fish carefully and envisions that it lives in this dish, and wishes that our favorite Japanese cuisine is a treasure loved by all people around the world. This is a dish that was completed in January 2012.

How I Make My Favorite Japanese Food In Winter • Tasty

Japan Airlines Review: How Is The Food?

►Review about Japan Airlines: ►Instagram: ►Facebook: NOTE: Before I get started I just want to say this video is not sponsored or affiliate with Japan Airlines at all.I just happen to luckily have a flight with Japan Airlines, and I made a video.All opinions are my own. I was in Phoenix, Arizona, and I had a flight to Singapore (with a different airline), and my wife and I were supposed to fly from Phoenix to Los Angeles to Hong Kong and finally to Singapore.It just so happened that our very first flight, which was just to Los Angeles, was delays ...