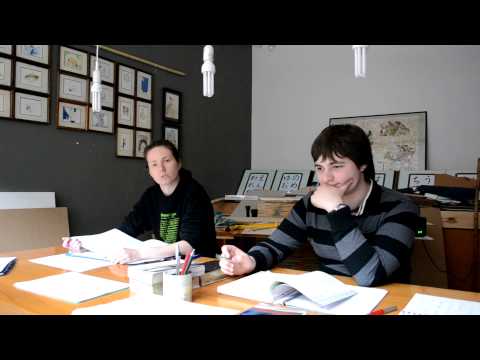 Visit the Japanese Institute for Japanese Culture in Latvia Riga. The interior was not completed during the relocation of the laboratory. By the way, it was made in 1991 after independence and has a history of 21 years. The former principal was founded. Small children-students and adults learn. There were various exhibits inside.
The teacher of the Institute for Japanese Culture (a man wearing glasses) says that there was no freedom during the former Soviet era. He was constantly monitored and could not say what he wanted to say. I have come to Japan twice. He has knowledge of Japan and is pro-Japanese and acquaintance. Teacher Please continue to spread Japanese language and culture in Latvia.
Three students were learning Japanese. All three are young college students. There are many people who have come from this school to work related to Japan. Latvia is a small country with a small population, but there is such an institution and I was happy as a Japanese. The students this time were not so good at Japanese, but they also practiced conversations together.
There are not many people learning Japanese in Western Europe + the United States, but there are quite a few people learning Japanese in these three Baltic countries, Eastern Europe, Australia, and other countries in Asia.
Visit Japan Cultural Institute of Latvia, Riga. Now I have not completed transfer decorated in the laboratory.By the way, you can after independence in 1991, has a history of 21 years here.That of the previous principal was founded.Student-small children, working people learn.There was a variety of some of them exhibit.
It is (man with glasses) teacher of the Institute of Japanese culture era of the former Soviet Union there was no freedom.Can always be monitored, and what you want to say but could not.In Japan is likely to come twice. of Japan to pro is a pro-Japanese group.Please spread in Latvia Japanese, Japanese culture in the future teacher.
Three students were learning Japanese.Three young college students together.Graduates of this school, and that there are many people who take a job that is related to Japan.Latvia is a small country with less population, there is such an institution, he was delighted as a Japanese.But the Japanese force until there is not high, students of this time, was also the practice of conversation partner together.
+ Western Europe in the United States are not many people who learn Japanese, especially in Asia, these three Baltic countries, Eastern Europe, and Australia, who learn Japanese quite often.

# 068 What is Japanese onomatopoeia? / Get more ideas about Japan / Japanese culture, custom, food.

We Japanese use onomatopoeia extremely often in our daily conversations.We can express s lot of feelings, situation, even your health conditions with Onomatopoeia is amazing and unique language tools to communicate with others which deeply connected to our culture, custom, weather, daily life and history.It's said that the number of Japanese onomatopoeia is 4 times more than English.Would you like to learn and Know how we use them with which kinds of situation? It must be very interesting, also this can be short cut to understand Japanese language deeper and faster.Anyway using onomatopoeia makes Japanese more cheerful, happy and lively.Kitty ...

This is Japanese culture! If you have any literature about various Nata collections

Two-sided new sense news variety Sunday evening at 9:00 (with shift on consecutive holidays) Look back on the weekly news instead of talking unilaterally This program is easy to read while chatting together. We accept questions, claims and requests in the weekly News-chan question box. Please send it to the following e-mail. [Email] fnwatcher@gmail.com [Question BOX] [YOUTUBE channel registration] 【twitter】 [Question BOX] fnwatcher@gmail.com ー ー ー ー ー ー ー ー ー Copyright-related ---------- The content of this video is not related to the image, music, or the creator's intentions. ● Illustration ・ Irasutoya ・ Sakihana (provided by users) ● ...

While adopting all cultures flexibly, without losing the core of tradition, unique culture Japan has been aged as Based on Japan's receptivity, Kyoko Nakayama, a member of the House of Councilors who is also developing activities aiming for a country where the world's culture shines, overflows and interacts, learns the essence of Japan's culture and ideas, including Japan. We invite intellectuals and people who are active in various fields and work together to create dreams. Moderator: Kyoko Nakayama (Former House of Councilors) Guest: Akira Hyakuchi (Project Professor, Kokushikan University, Professor Emeritus, Nihon University) * Channel Sakura is recruiting members of ...