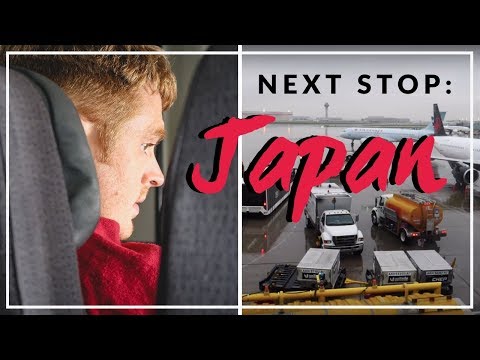 Our Japan trip starts right now! Join us for a travel vlog flying to Japan from Canada going from Toronto to Vancouver to Osaka with Air Canada. We've been wanting to take a trip to Japan since we taught English in Korea back in 2012.We had always assumed it would be our first destination to visit after teaching but we ended up delaying and putting it off.We're now finally visiting Japan together for the first time!

Our long journey started off in Toronto with a flight to Vancouver with Air Canada. Upon arriving in Vancouver we had quite a bit of time to kill before catching another Air Canada flight to Osaka.Overall, it was a really tiring day but we arrived excited to be in Japan despite our jet lag.

Upon arriving we took the train and metro to our airbnb with a few snags along the way.After passing out we grabbed a convenience store meal from Lawson as our first dinner in Japan.We're really excited to explore Osaka in the next episode. We're so excited about this Japan trip series as it is the biggest one we've created to date.

At long last.We've been wanting to visit for years.Like I thought this would be the first place we visited after we finished teaching in Korea way back in 2012.It has been five years in the works.We planned trips in the Past to go to Japan. Canceled them and just haven't found time but now we've made it a priority.We are going for 2 months in Japan.And we have 2 flights today.

We're going to be flying from Toronto to Vancouver.That is five hours.Changing planes and then Vancouver to Osaka.It is going to be 11 hours.And we are flying into Osaka instead of Tokyo yeah because it was cheaper.

We got a great deal.If you are planning to travel around Japan not just in Tokyo look at neighbor cities.I think we may have got our flights.I can't remember because we booked them a few months ago. have been like 900 something Canadian. Canadian. That is like 700 US something. Incredible deal. It is usually double.

Well the never-ending journey.We've made it.We're in Japan.We have made it.It has been such a long travel day like we probably look like urgh.We need sleep.

We got our tickets for 920 Yen.We're going to Taknachia or something like that and then we have to transfer to the metro so we're a bit lost and confused at the moment.We are going to figure it out eventually.

The update is that we found the metro but before buying the metro tickets we followed incorrect instructions.

Let's enjoy it our first meal in Japan guys.

Time for a little update.But we're also whispering because it is really late yes and I think we have neighbors so so we basically just came in here and I think we were passed out within seconds not minutes.

The meal is really good so far.The only surprise is that I thought it was a pork tonkatsu but then we bit into it and we're like this is fish.It is like breaded fish but still tasty.I'm moving on to the dumplings now.

This is part of our Travel in Japan video series showcasing Japanese food, Japanese culture and Japanese cuisine.

ISLAMABAD-Japan and Pakistan signed a memorandum of cooperation on Monday aimed at paving the way for skilled Pakistani workers to work in Japan, the Japanese Embassy said. The cooperation framework agreement provides that “specified skilled workers” who pass a required examination and a basic Japanese-language comprehension test will be eligible for employment in Japan, according to a press release by the embassy. It said Pakistan is among the countries from which Japan is looking to hire skilled workers, having already inked similar memoranda with Bangladesh, Cambodia, Indonesia, Mongolia, Nepal, the Philippines, Sri Lanka, Thailand, Uzbekistan and Vietnam. The embassy also ...

There are so many themed venues in Tokyo, so when I heard that there was an AVOCADO-themed restaurant in Harajuku, I HAD to check it out! 🥑🥑❤️🥑🥑 basically This is a bit of a short and sweet vlog, so I hope you guys enjoy it! With avocado overload, checking out some shops and taking purikura (super kawaii photobooth pictures!), Come along on our lil girls night out in Harajuku! SUBSCRIBE // ­___ // IN THIS VIDEO Madosh! Cafe // ­___ // Let's get to know each other!   Blog // Instagram // Facebook // ­___ // MUSIC “Harajuku” by VOIA ...

Chinese people are so kind people! 6 honnes felt by Chinese in Japanese sightseeing

We post fun videos every day. Please subscribe to the channel. Today's coffee break Chinese people are so kind people! 6 honnes felt by the Chinese in sightseeing in Japan 〇Video content Information about inbound trips. The number of repeaters is increasing recently. I will tell you about the 6 things that the Chinese felt during sightseeing in Japan, as explained by the Chinese interpreter guide. BGM source 【Related Videos】 [Chinese media] I came back from studying in Japan and noticed! It was serious ... "Japanese customs were permeated" [Chinese news] Chinese children who are selfish and uncontrollable, Japanese education ...